What is a Sapphire Gemstone? 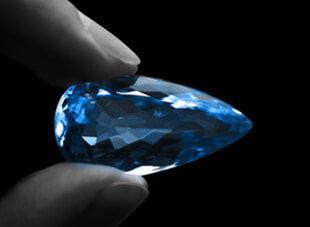 The Sapphire is a precious gemstone and is a variant of the mineral corundum. Its name derives from the Latin word “sapphirus”, and some linguists believe that its name comes from the Sanskrit “Shanipriya ”from “shani” (meaning Saturn), and “priya” (meaning dear).

Typically a vibrant blue color, natural variants (known as “fancy” sapphires) may be yellow, orange, purple or green, with two-colored “parti” sapphires existing as well. The only color that a sapphire cannot be, is red, which is exclusively the domain of its counterpart, the ruby. Interestingly enough, pink corundum may be tagged as being either a sapphire or a ruby, depending on where it's been found.

The third-hardest mineral on the Mohs scale (after diamond and moissanite), Sapphires are beloved for its use in jewelry, as well as its industrial uses including wristwatch crystals, infrared optical components and LEDs. Sapphires can be found naturally, as well as created synthetically.

A traditional Hindu belief holds that the sapphire causes the planet Saturn (Shani, from its Sanskrit name), to be favorable to the wearer. Italian superstition believes that one may guard against eye problems and melancholy with sapphires as amulets.